The Niv (Nipah Virus Infection) is spreading rapidly in Asia with numerous cases. While the Nipah virus outbreak was reported in Malaysia, it has gradually reached other countries like India, Bangladesh, and Singapore as well. Nipah Virus is extremely dangerous as its worst condition can leave a patient in a coma. Read on to know what it is and how to protect yourself from it.

Part 1. What Is Nipah Virus

Niv is a form of “zoonosis” that can affect animals as well as human beings. It is an RNA virus that belongs to the Henipa virus genes. It is a contagious virus that can spread from one human to another or even from animals to humans. Currently, there is no vaccine for the virus hence it can’t be prevented beforehand. Though, there are laboratory tests being conducted for the disease. Also, people are advised to prevent the transmission by taking strict preventive measures. 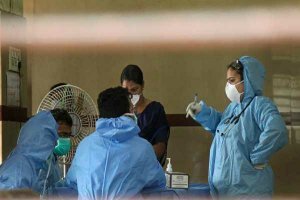 After a few years, another case was reported in Bangladesh. At that time, fruit bats were assumed as the host of the virus. Though, in May 2018, a rapid Nipah Virus outbreak has been reported from Kerala. In a handful of days, 13 people have been infected. Out of them, 11 have died till date.

If you want to protect yourself and your loved ones from the virus, then you need to know the major symptoms. According to healthcare experts, it takes 4 to 14 days for the virus to spread in our body. The initialm symptoms include headache, cough, fever, and lack of energy.
Gradually, it leads to drowsiness, shortness of breath, and mental confusion. After suffering from mental disorientation, it can break to a comatose stage in 2-3 days. Nipah virus Encephalitis is a dreaded combination of the disease that can cause a serious harm to our brain in less time.

Unfortunately, there is no foolproof and effective Nipah virus treatment as of now. Researchers and scientists are currently working on a reliable drug to treat the disease. These days, a passive immunology technique is implemented as a treatment. In this, a human antibody is used to target the virus. An anti-malaria drug is also used as a treatment in some hospitals. While it can stop the virus from spreading, it is not a failsafe cure. 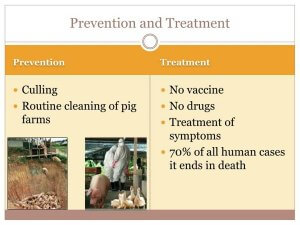 Since Nipah virus can lead to death and coma, it is of utmost importance to take the needed prevention measures. After all, it is better to be safe than sorry. Here are some suggestions that you can follow to prevent the virus.
• Avoid the exposure to sick pigs and bats as much as you can.
• Since it is a contagious disease, don’t get exposed to a Nipah virus patient without taking the proper measures.
• The drinking of raw palm sap should be avoided at any cost.
• Be cautious and don’t consume water from wells that are infected by bats (or fruits bitten by bats).
• Use disinfectants to clean your home and make sure your surrounding environment is hygienic.
• Try to avoid eating seafood and raw meat.
• If you are getting a fever combined with hallucinations and respiratory issues, then consider a doctor immediately.
• Recently, all the deaths related to Nipah Virus have been reported from Kozhikode, Kerala. While visiting the city is safe, travelers should be extra cautious. 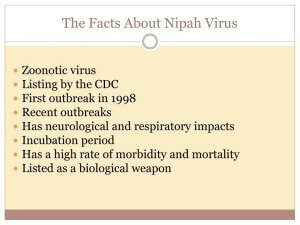 Now when you know what is Nipah virus and how it can be transmitted, let’s quickly refresh some important facts.
• The virus can infect both humans and animals and is contagious in nature.
• Pigs and bats are considered the major sources of the virus.
• The virus only takes 3-10 days to spread rapidly in the body.
• It can lead to coma and death in a few days as well.
• The Nipah virus Encephalitis is the most deadly combination that can lead to brain damage and death.
• Recently, 11 people have died of the virus in India.
• As of now, there is no effective treatment for the virus.
• Surprisingly, this is not the first outbreak in India. The first outbreak happened in 2001 and the second in 2007. It led to more than 50 casualties.
• In Kerala, a nurse has died while treating a Nipah virus patient.
• According to the officials from Kerala, the outbreak of the virus has been contained in the region.

Part 7. Watch All the Latest News on Snaptube

If you want to know more about the Nipah virus and the latest news in the country, then download Snaptube on your device. This freely available app is compatible with all the major Android devices out there. It has integrated a wide range of video sharing platforms together. Therefore, you can easily find the news and related topics of your choice. With a fast-loading player and unlimited high-quality content, Snaptube will become your favourite app in no time.