As you know, Veere Di Wedding is an upcoming Bollywood movie. It has been marketed as a female buddy comedy flick since the story features a female-driven cast. Directed by Shashanka Ghosh, the film is expected to be released on June 1, 2018. Though, the first trailer of the movie was released on April 25, 2018.

Veere Di Wedding film has been produced by Balaji Motion Pictures and Anil Kapoor Films &Communication Network. It is a joint venture between Ekta Kapoor, Nikhil Dwivedi, and Rhea Kapoor. Here is what the Veere Di Wedding major cast looks like.

Since it is still a while for the movie to be released, you can have a look at Veere Di Wedding trailer to get a better taste of it. 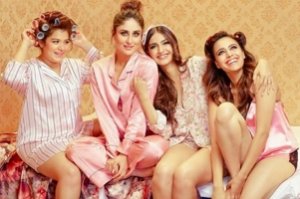 Veere Di Wedding has a diverse ensemble of cast. As you can see, Kareena Kapoor and Sonam Kapoor are leading the cast with their charismatic presence. It is the story of four friends, who takes an unforgettable trip right before the big wedding. It also features the wedding and all the unexpected events that take place during the wedding. Needless to say, the movie has a unique appeal to it and is expected to be extremely funny. Unlike other comedies in Bollywood, Veere Di Wedding is likely to be focused on friendship.

The movie has been shot in Delhi, Mumbai, and Phuket. While the wedding took place in India, the girls decided to go on a trip to Bangkok before the wedding. The movie is already being compared to Hollywood flicks like The Bridesmaids. Some people are also calling it a more commercial rendition of Angry Indian Goddess.

Even before the release of the movie, it has been in a few controversies. Another film with a similar name (Veerey ki Wedding) was released earlier this year. It starred Pulkit Samrat and Jimmy Shergill. Since the movie had a similar name, it left the audience confused. Also, the producers filed a case against the movie but didn’t get the desired results.

Even though the movie has not been released, most of its major songs are already out. The music in the movie is given by different directors and bands like Shashwat Sachdev, Vishal Mishra, QARAN, and White Noise.

Also known as “No One Gives a Damn”, it is sung by Neha Kakkar, Romy, and Shashwat Sachdev. The music of the song is also composed by Shashwat Sachdev. A fun and peppy number, it will make a great wedding dance track.

This is another popular track that has been released as a promotional number. Sung by Badshah, the music of the song has been composed by QARAN. The official music video for the song is already out.

Besides these two tracks, the entire album has also been released. If you want, you can check out some other songs in the movie as well. A few popular songs from the album are Veere, Aa Jao Na, Pappi Le Loon, and Dagmag Dagmag.

Snaptube is a freely available Android app that can be used to download Veere Di Wedding movie songs. Besides that, you can also find tons of other songs and videos on Snaptube as well. You can download songs as well as videos of your choice using this remarkable app and that too free of cost. The app has integrated various platforms in one place. Therefore, you can find all the songs and videos you are looking for without the need of switching between different apps. It has a fast-loading video player that supports the steaming of HD content and mp3 download. Go ahead and download this amazing app on your device and make the most of your smartphone.