South Indian movies are rapidly gaining popularity the world over. Even though these movies were quite popular in the southern part of the country, they are gradually expanding their reach by being dubbed in other languages. The Hindi-dubbed South Indian movies prove to be a great source of entertainment these days and thanks to the web, they are very easily available too. So, here is a list of the ten must-watch South Indian movie dubbed in Hindi in the year 2018 that you should give a watch.

There are hundreds of South Indian films in Hindi dubbed every year. It is extremely difficult to decide which one to start watching first. Therefore, we have compiled a list of best movies that are best dubbed in Hindi.

The movie features a remarkable blend of action and romance that is a signature move of most of the South Indian films. Originally released a few years ago, it was finally dubbed in Hindi this year. The plot of the movie revolves around a young man named Sivaji, who goes on a date with a girl and the girl gets kidnapped. The movie follows Sivaji taking extreme steps to find the missing girl.

This is another South Indian action thriller, which was finally dubbed in Hindi. The plot of the movie revolves around a happy-go young man Shivaraj, whose elder brother is killed by a gangster named Narasimha. When the police are not able to do anything to arrest the gangster, he and his father vows to take revenge.

The movie is one of the latest additions to South Indian cinema. Allu Arjun can be seen taking the lead role along with Pooja Hegde in this movie. It is a story of an honest man who goes to great lengths to help people. Seeing this, a police officer asks the hero to stand as a crime fighter in the society.

Mammootty takes the character of David Nainan, a famed builder in this movie. When David’s 10-year-old daughter is raped, he and his wife are extremely devastated. They decided to find the criminal and in the process discovers the serial crimes the rapist has done in his life.

This is a Tamil thriller and drama with a social message. The protagonist, Kadamban is a boy next door, who along with his fellow members, tries to stop a powerful businessman, who plans to destroy the forest area surrounding the village. Arya along with Catherine Tresa can be seen taking the lead role in this movie.

Sudeep and Nitha Menon’s Kannada film is one of the best movies to be dubbed in Hindi. In the film, Sudeep is a real estate agent, who also happens to be a robber as well. He gets on the radar of a corrupt cop, Sai Ravi, who is hell bent on catching him and bringing him to justice.

Shivalinga is a typical South Indian movie with just the right amount of action and thrill. In this movie, Raheem gets killed while saving a blind man in a train. When the police decides to stop an investigating and closes the case stating it as a suicide, Raheem’s wife calls in Shivalingeshwaran, a CID officer to find out the truth.

Starring two of the most popular Tollywood celebrities, N.T Rama Rao and Samantha Akkineni, Janatha Garage is a story of a young man named Anand, who comes to Hyderabad to attend a seminar. However, an unexpected meeting with Sathyam, who runs a social organization for the oppressed, changes his view of life forever.

Literally translating to “The Prince”, this is a record-breaking Kannada film. The lead role in the movie is played by Puneeth Rajkumar, Prakash Raj, and Priya Anand. In the movie, a dutiful son proves himself righteous of his name and retains the purity of his character by overcoming every challenge in his way.

The main character, Dhruva, played by Ram Charan, is an IPS officer in the movie who discovers a huge network of organized crime in the city. He decides to bust the criminal organization by taking down the mastermind behind the entire network. However, it is not an easy task and he is faced with many difficult challenges in his way.

Hindi-dubbed movies have become a great source of entertainment these days. Major population, who cannot understand different South Indian languages, can now enjoy these movies without any problems.

You can find your favorite South Indian movies HD dubbed in Hindi on Snaptube. Here, you will find videos, music, and movies integrated from thirty different popular websites, making it extremely easy to find exactly what you are looking for. You can find a wide range of regional entertainment along with popular movies and shows from other countries as well.

Download
With a fast video player programmed in, you can enjoy movies and music anywhere and anytime on the go. The most attractive part about Snaptube is that all the high-quality media content is available here absolutely free. It also offers the picture in picture mode, which allows you to browse and stream videos simultaneously. Download the Snaptube app now and enjoy unlimited movies and videos on the go.

Part 3. Website to Watch All the Latest South Indian Movies

Indian Movie Pro hosts a wide range of films from different genres and languages that you can watch for free. The website is updated on a regular basis with the listing of all the latest movies that you can watch in the best-available quality. Besides the latest releases, you can also watch all the popular and timeless classics on Indian Movie Pro as well. Users don’t need to create an account or even have to close unwanted pop-ups to stream videos. Simply visit the website, search for your favorite videos, and relax. 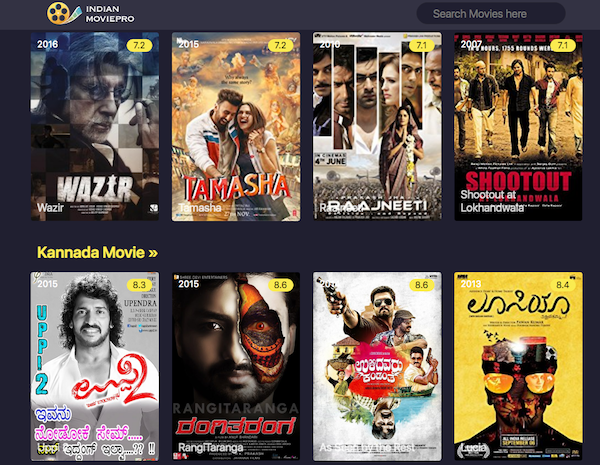