There is no denying the fact that Sanjay Dutt is a living legend. The Bollywood’s erstwhile bad boy has certainly gone through lots of ups and downs in his life. While he has always been extensively covered by the media, there is still a huge part of his life that is a mystery to everyone. The Sanjay Dutt biopic is going to answer tons of these questions for sure. The movie is already in production and will hit the silver screen soon. Here is everything we know about Sanju, the upcoming movie based on Sanjay Dutt biography

As you can see from the first look of the Sanjay Dutt biopic, Ranbir Kapoor has portrayed the role of Dutt at different stages of his life. While it is too early to judge, the trailer looks promising with Ranbir evidently resembling Dutt in more ways than one can imagine. While the trailer was released on April 24th, the movie is expected to be released nationwide on 29th June, 2018.

The movie has been produced by Vidhu Vinod Chopra and Rajkumar Hirani. Hirani along with Abhijat Joshi wrote the script of the movie and tried to keep it as accurate as possible. The music is composed by A. R. Rahman, Shantanu Moitra, and Amaal Mallik. Besides that, here is the complete detail of the Sanjay Dutt biopic cast.

The Sanjay Dutt biopic is quite special due to numerous reasons. Not only is it based on a real-life story, the cast includes various actors playing different other veteran actors (and even themselves). Being one of the first projects of its kinds, it certainly has high expectations from its audience. 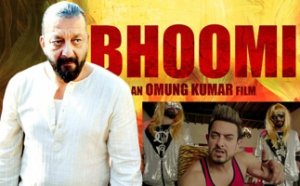 Since Sanju is based on Sanjay Dutt’s life story, it is important to know more about the famous star. Born on 29th July 1959, Sanjay Dutt is the son of veteran Bollywood actors, Nargis and Sunil Dutt. Currently married to Manyata Dutt, he has been married twice before and has 3 children. Dutt has been in the limelight for almost 40 years and has worked in countless of movies.

Rocky, which was released in 1981, was Sanjay Dutt’s first movie. The movie became a major success and landed Dutt plenty of roles. He went ahead and worked on numerous projects like Saajan, Vaastav, Musafir, Munna Bhai, and more. Apart from giving blockbuster movies, Dutt has also been in the news for other reasons. He was found guilty under the Possession of Arms Act and was later imprisoned. Even though he tried to act in a few movies by getting a bail, he later had to serve the entire sentence. Here are some of his best movies that you can watch.

Munna Bhai is one of the most successful and critically acclaimed movies of Sanjay Dutt. It is the story of a gangster, who got an admission in a medical college. What leads ahead is a heartfelt story of how a gangster ended up inspiring doctors.

Lage Raho Munna Bhai was the sequel of the first movie, which was also directed by Rajkumar Hirani. The movie starred Vidhya Balan as a female lead with Sanjay Dutt playing the epic role of Munna. The movie is based on the principles of Mahatma Gandhi and how the protagonist applied them with a modern twist.

Vastaav is one of the early movies of Sanjay Dutt’s career. He portrayed the role of Raghu Bhai, another gangster who made headlines for all the wrong reasons.

Sanjay Dutt portrayed the role of an antagonist in this epic movie. Not only was it a commercial success, Dutt was highly appreciated for his role of a psychotic gangster as well.

This Sanjay Dutt new movie was released earlier this year. Dutt portrayed the role of a father in this film, who had to go through the toughest of times to protect his daughter.

After getting to know more about these Sanjay Dutt movies, you must be pretty excited to give them a watch. To watch Bollywood movies free of cost on your smartphone, simply download Snaptube. It has integrated various video sharing platforms like Dailymotion, Vimeo, etc. You can simply look for the movie of your choice and start watching it for free. There is a vast collection of Bollywood as well as international movies that will keep you entertained for sure.